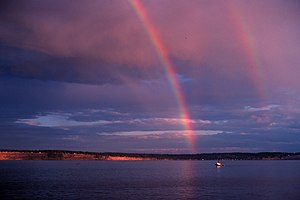 Rainbows is a powerful uglykinetic/face morpher and former member of the Teletubbies. She currently resides in an unusually large hotel.

Rainbows started as a freaky creature who was created when a solar eclipse beat up an explosion that had just mugged a meteor. She flew to Earth, and landed in a fireball. She started donating money to various charities. Eventually, she caught the attention of the Teletubbies. They came from Teletubby Land, and invited her to their team. Despite being a good person, she accepted. They told her that her first assignment was to kill one of their friends for a test. She refused, so they threw her into the Teletubby Land Acid Lake. She died, but then Cookie Person came to her, and revived her with superhuman abilities. She now lives somewhere.

Retrieved from "https://kamafadelgato021469.miraheze.org/w/index.php?title=User:KMFStudios/Rainbows&oldid=10175"
Categories:
Cookies help us deliver our services. By using our services, you agree to our use of cookies.