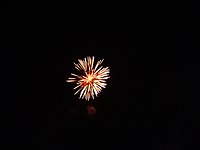 Don't get on the bad side of Phoenix Wright

The OBJECTION bomb is a devastating attack that Phoenix Wright likes to use when he is REALLY pissed off. It is powerful enough to blow apart an entire city, and knock down a plane thousands of metres in the air. Phoenix tried to avoid using this if possible, because it is overkill, big time.

In order to preform this legendary attack of unspeakable destruction, the user must first be REALLY mad. Then, he jumps into the air, and goes up a 50 metres in the air. Then, he turns orange (We're not sure why), and then he comes back down at 5839273km/h (or 0.0054 times the speed of light) screaming "OOOOBBBBBJJJJEEEEECCCCTTTTTIIIIIOOOOONNNNN!!!" If done right, a massive explosion will take place, and everything within many kilometres of the user will be obliterated.

The OBJECTION bomb has only been used seven times before. It was first used twice, during World War Two (they say they were atomic bombs, but it was actually Phoenix Wright). Then, he used it four times during various court cases. Finally, he used it one time when the Police were giving him a problem. He got away with all of it because he had such a good attorney (himself).

Did I mention this attack gives ouchies?

Retrieved from "https://kamafadelgato021469.miraheze.org/w/index.php?title=User:KMFStudios/OBJECTION_Bomb&oldid=10091"
Categories:
Cookies help us deliver our services. By using our services, you agree to our use of cookies.