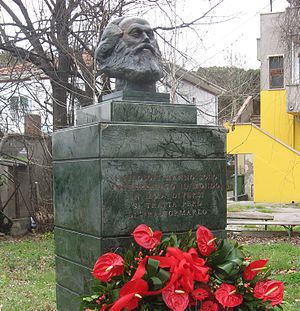 Marx in all off his glory.

Marx is an evil (sometimes frankly good) flying psychopathic imp that wears a mirror hat from the Kirby series that throws dangerous objects at his foes, and can also Shoop da Whoop like Dr. Octogonapus. He is also a boss in one of the Kirby shames (but is a little too powerful to kill, as why he is defeated is that he uses clones of himself because Nintendo asked for one of his clones to be the final boss of most Kirby shames).

Not much is known about Marx's past or where he was born, but it includes he went to high school with Meta Knight and King DeeDeeDee in which they we're the gangstas of Nintendus County High, along with Pinkachu, Cyber-Dee (who was there to research the school, since he already knows almost everything in the universe), and the Awesome Guy.

After graduating from Nintendus County High, Meta Knight, Marx, and his gang friends moved onto college, where they only did a little classwork, and spent their breaks doing graffiti on the college property, which was called Ninten-Tech Institute. After graduating from Ninten-Tech Institute, the group spent six years as real-street gangstas, dancing to rap and hip-hop, vandalizing pooperty, and other stuff.

Marx is also responsible for Shoop da Whooping Meta Knight, but why Meta Knight survived is because originally, he was a regular blue Kirby who wielded an awesome magical sword when he was in the 4th trimester of High School. After graduating, he started fighting opponents before meeting Kirby, and one day, he wanted to defeat Marx because he secretly stole some of his cash after their gangsta years, but Marx Shoop da Whooped Meta Knight, burning him. But, however, he managed to survive the heavy lazor Marx fired at him, which bleached him dark blue, and his feet purple. He got his revenge on Marx by shooting him away with a catapult three years later, thus, throwing him into the Death Star (which was the actual cause of the Death Star's destruction in Episode IV of Star Wars when Luke Slyrunner fired a missile into the Death Star, the troops simply cut the fuse to the bomb, that shows that Marx's strength was so powerful, his energy made him lose control and shot into the Death Star). This was actually a stuffed mecha-decoy set up by Marx, as revealed by the real Marx. He Shoop da Whooped alot of things, especially Sonic. He also attended the Nintendo Super Bowl VII.

Marx currently does what he does best... Shoop da Whoop his enemies. Nothing else. He became friends with Dr. Octogonapus and H.

Retrieved from "https://kamafadelgato021469.miraheze.org/w/index.php?title=User:KMFStudios/Marx&oldid=9843"
Categories:
Cookies help us deliver our services. By using our services, you agree to our use of cookies.