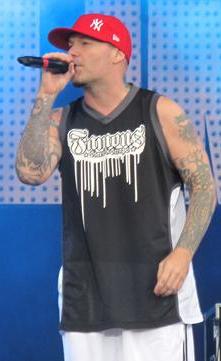 Fred Durst in a moment of disapproval.

Fred Durst is famous for being a Teletubby Army recruit. He has contracted Cbeebies when he was born and kills people with his atrocious rapping and being a rip off of the far superior Korn or Beastie Boys. A person was killed in his moshpit from his singing. Po liked this so he recruited him for the job. He often FAILs, and Ganon wants him to DIE.

- Some guy from a movie upon seeing Fred Durst's demonic face.

- Stephen King's reaction when asked about Fred Durst in an interview.

Horrible singer. Satanist. Murderer. Member of Cthulhu's army. These are just some of the many horrible things Fred Durst is.

Retrieved from "https://kamafadelgato021469.miraheze.org/w/index.php?title=User:KMFStudios/Fred_Durst&oldid=9635"
Categories:
Cookies help us deliver our services. By using our services, you agree to our use of cookies.