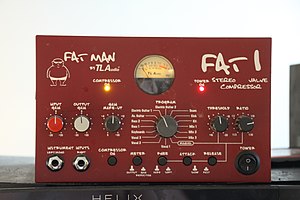 Fatman during his daily exercise.
File:Fatman.jpg
Fatman, while on a diet.

Template:Quote Fatman is a Super Fat-powered superhero character that lives in Possum City. He was originally a regular fat moron named Bruise Pain, but he got a costume that actually fit him, and became Fatman. Ever since then, Fatman has been running rolling around crushing bad guys and hippies underneath his fat rolls of doom.

Fatman's history is largely unknown, but some IS known. That's right, we actually discovered a history on someone. Bruise was just an eight year old kid when some man came up, and killed his parents. He vowed revenge, but first he decided he was hungry. He ate, and ate, and ate until he was overweight to dangerous levels.

He kept eating until the hole in his heart where a love for his family used to be was filled. however, he couldn't fill the hole, and his food fetish continued for a long time until he decided to stop to get a beer. He amazingly survived, and decided this was a sign he must be Fatman. So, he paid three million UnDollars to get enough fabric to actually make a costume that fitted him. He did that, and started waddling around the Possum City streets to stop crime. After that he just ate Mcdonald's. I mean literally. He swallowed the entire building.

We'd tell you more, but we don't feel like it.

Fatman has Super Fat, an amazing power that lets him roll around, crush people, and eat so much food, he can shoot puke bombs at people.

He is also strong enough to lift four tons, just by using his fat. If he gets fatter, he would be able to lift more, but might die as well.

Fatman is famous for using advanced equipment to help him when his fat isn't enough:

Retrieved from "https://kamafadelgato021469.miraheze.org/w/index.php?title=User:KMFStudios/Fatman&oldid=8215"
Categories:
Cookies help us deliver our services. By using our services, you agree to our use of cookies.