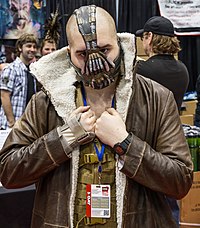 Bane of Losers is just a sad man who was given a sad fate. He was very sad, and everything that happened to him was sad. I am getting sad just thinking about it. This guy's whole life is just so sad. In fact, the only thing that overpowers the sadness is ANGER! This guy has so much ANGER!

Bane of Losers was once just a sad man. He was born into a family so poor, they thought money was some kind of conspiracy when they first heard of it. This man grew up so sad, some say his tears created the ocean (even though it was actually Chuck Norris' sweat from his intense workouts, LOL).

This sad man was jogging down the street one day, and he saw a sign. He jogged up to it to investigate, and it said "MILITARY LAB: DO NOT ENTER". This sad man was also a stupid man. He thought this was the name of some energy drink store that sold free energy drinks. He went inside and grabbed the first bottle he saw. He drank it like King Harkinian drinks DINNER.

Over the next several nanoseconds, weird stuff happened to this guy. He muscles grew, he got smarter, and he got more ANGRY! Eventually, he turned into that... thing in the picture above. This made him sad and ANGRY!

Calling himself Bane of Losers (despite being one), he ran around Possum City destroying anybody that looked like a loser, such as Everybody. He then decided this was not efficient, and created the ultimate weapon... the poo bomb! Bane of Losers shot it above the city. It was disarmed by Harvey Dented, but he was injured during the process and became Poo Face. He then killed Bane of Losers in revenge. Did he turn back into the sad guy when he died? Yes. Was everyone in the Fatman series invited to the funeral? Yes. Even Mr. Cold? Yes. Did Fatgirl & Mr. Cold have a fight at the funeral? Yes. Did he die in the making of Fatman 7: Enough Fatman Movies? Yes.

Retrieved from "https://kamafadelgato021469.miraheze.org/w/index.php?title=User:KMFStudios/Bane_of_Losers&oldid=7703"
Categories:
Cookies help us deliver our services. By using our services, you agree to our use of cookies.